Win / KotakuInAction
Win
Communities Topics Log In Sign Up
Sign In
Hot
All Posts
Settings
Win uses cookies, which are essential for the site to function. We don't want your data, nor do we share it with anyone. I accept.
DEFAULT COMMUNITIES • All General AskWin Funny Technology Animals Sports Gaming DIY Health Positive Privacy
60 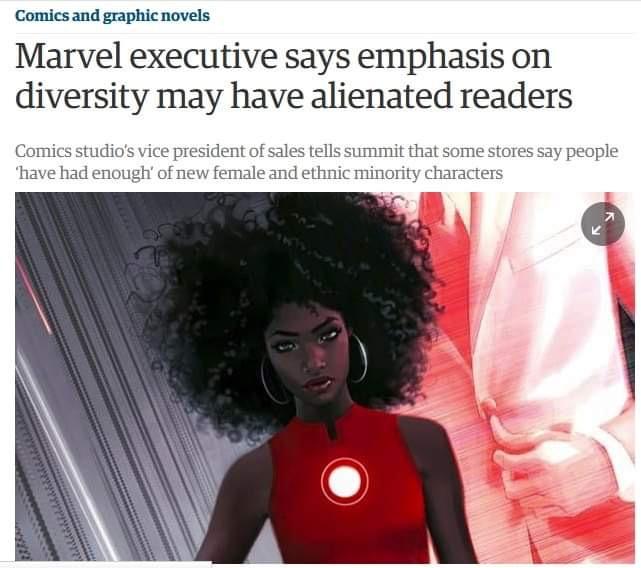 I never really cared what the identity of a superhero character was (other than maybe their secret identity!); I just can't bloody stand it when their "identity" is the entire story focus, or worse; when "adding diversity" comes literally at the expense of forcibly changing a classic hero for no other purpose or reason , rather than creating a new character and making that character be interesting in their own right. Superman never had to say "as a white Male from the foriegn planet Kripton.." before saving the day, and neither did Ripley before she started shooting facehuggers, and I loved them both.

Yup. The show The Expanse should be a model for how to have diverse actors.. just hire people and tell a good and coherent story. If a white man happens to date a black female computer wiz NO ONE minds as long as the show doesn't beat you on the head with it.

No shit. Worst thing is it took them this long to figure it out.

There are authentic ways to create diversity, and inauthentic ways. Into the Spiderverse did it in an authentic way with Miles and Spider Gwen, but Captain Marvel? Not so much. I feel like DC did a good job with their 2000s Static Shock cartoon and with the Justice League cartoons Green Lantern. Diversity was present, but the audience didn't feel beat over the head with it, and it felt natural. If you had replaced Batman in Beyond with a Black teen, nobody would have cared either.

Part of Marvel's problem is that X-Men had their movie rights owned by Fox, and Sony has the movie rights to Spiderman. X-Men especially features a diverse cast, and I don't think consumers would have minded a Storm movie instead of another Wolverine film.

Should've kept the ultimate universe around.

Okay, so when is Marvel gonna oust Sana Amanat?

Yeah, no shit, you absolute cunts.

It took you this long for it to dawn on you morons? Jesus Christ, no fucking wonder people are abandoning Marvel and manga/etc ended up doing way better than you motherfuckers. You fuckers are too late now in realizing it and I'm smiling at your inevitable death knell as even MORE people abandon you.

"Diversity" did FUCK ALL to help your brand. Have a nice death, dipshits.

I don't think people "have had enough". I think they never wanted them in the first place, in the manner they were pushing them.

Some? Lol, most, and years ago.

I have no desire for diversity. That being said, there are comics fans who probably would have been ok with having more "ethnic" and female characters had they been written well, not just propaganda pieces and not completely disrespecting existing characters, suing them as props to make the diverse characters seem better, or teach the White ones a lesson. Juts, yeah. Also, The people who actually read comics, the few left, are mostly White males. You're not going to appeal to the majority of them using characters they can't relate to as easily as other White males. Diverse people and women aren't going to start reading either, even with good characters. This was always about propaganda and Marvel never cared. They don't even care now, not about readers, just that it's spilling into the movies and those juicy profits maybe.